On Tuesday 28th of February I had the wonderful opportunity to speak with the Tamils for Labour group. In the speech I gave I highlighted the importance of British diplomacy in ensuring justice for Tamils affected by the Sri Lankan Civil War. I have shared the speech below for you to read.

We are all concerned about some of the reports we’ve been hearing from Sri Lanka recently, and I’ve been asked to say a few words about Labour’s position.

So let me begin by making this clear: as shadow Foreign Secretary, I believe that we need a progressive vision for British foreign policy, which has respect for human rights at its very heart.

We must ensure that protecting human rights and human dignity is built into all of our relationships with other countries.

And so we believe that diplomacy should focus not just on ending wars -; important as that is -; but also on doing everything within our power to stop them from breaking out in the first place.

It means we have a duty to do everything we can to help countries such as Sri Lanka, which are struggling to rebuild societies torn apart by conflict in the past.

Today, many if not most British Tamil families include at least one member with personal experiences of the civil war in Sri Lanka, and indeed it was the terrible suffering produced by that war which led many Tamils to seek refuge here in the first place.

So the people in this room will understand better than anyone how important it is, almost eight years since the war’s end, to keep up the hard work of helping to make sure that old wounds are healed and that lessons are learned.

I know that when President Sirisena was elected in 2015, there was a real sense of optimism that his promises of justice and reconciliation would be delivered.

But despite the fact that there has been some progress, I am very disappointed that this continues to fall short of what’s needed.

In the past few weeks we’ve heard reports of grieving mothers who are so desperate for answers about what happened to children who went missing that they have gone on hunger strike in an attempt to force the government to act.

It took days of fasting for the Sri Lankan authorities to finally start paying attention to the mothers’ demands for proper investigations.

And it is still far too often that we hear reports of abuse at the hands of the Sri Lankan authorities, even today.

Torture, which should never be tolerated by anyone, has recently been described as ‘common practice’ by the UN.

So the Sri Lankan government needs to be held to account on this.

We must keep up the pressure -; and we must insist that further progress is both necessary and expected.

So I am not convinced that now is the right time to reintroduce EU trade concessions to Sri Lanka.

We need to think about what message this would send on human rights, and I will be writing to the Foreign Secretary and urging the government to press for further progress on human rights before any trade concessions are offered to Sri Lanka.

I’m also going to ask that Ministers use the opportunity of the current session of the UN Human Rights Council to push for a renewed commitment to the resolution it passed in 2015.

That resolution was a real landmark.

It made clear that there is an absolute responsibility for the Sri Lankan government to ensure that justice is done, and seen to be done.

It set out measures, like the establishment of a fair and impartial tribunal to investigate, prosecute and punish the perpetrators of war crimes, which the Sri Lankan government would be expected to implement.

This is absolutely essential for the promise of justice to be delivered, and I am deeply disappointed that progress on this issue has been so slow.

Please be assured that these concerns are a top priority for the shadow foreign affairs team, and that we will continue to press the UK government for meaningful action on human rights in Sri Lanka.

The Tamil community is an important part of the Labour movement.

We are friends, and Labour will do everything we can to help. 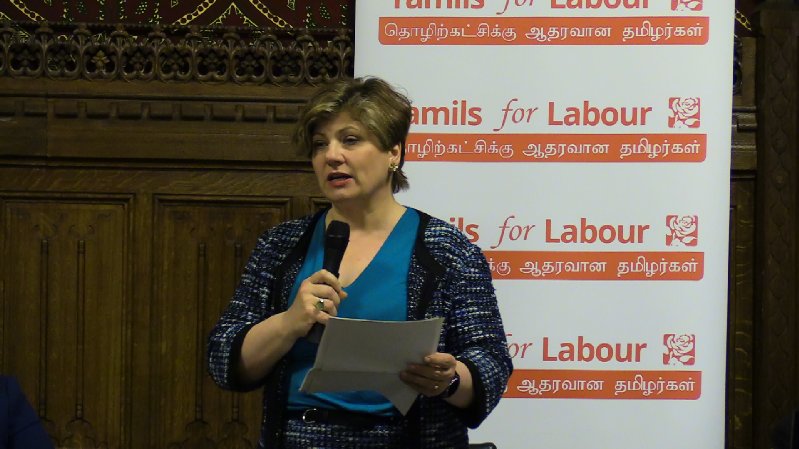