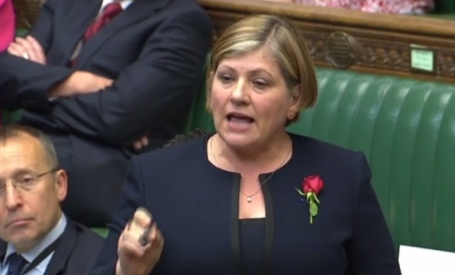 It was a privilege to speak on behalf of my constituents today after being re-elected with such a convincing majority, although I’d obviously hoped to be returning as part of a Labour government…

There’s no doubt the next few years are going to be tough for Islington, with a government that has already pledged to lower the benefit cap still further ‘to reward work’ -; even though all the evidence from the last two years has shown it’s done nothing of the kind. In my constituency it just pushes people out of Islington; children from established families in Islington have to leave their primary school and move out -; not because £23,000 is not enough for the family to live on, but because it is not enough for their landlords to live on. The rents are so high and these people are expected to pay ridiculous amounts. And the government has also renewed its pledge today to sell off housing association homes when there’s a desperate shortage of social housing in places like Islington.

I’m pleased that the Tories’ long-standing dream of repealing the Human Rights Act appears to have fallen at the first hurdle. This inspiring piece of legislation represents the best of the UK’s proud history of standing up for democracy and human rights around the world, and walking away from that would leave our international standing in tatters.

I’ll be working hard every day over the next five years to make sure the Tories know they’ve got a fight on their hands if they continue to threaten the hard won rights and freedoms -; not to mention the livelihoods -; of Islington’s families.

You can read a transcript of the debate online at http://www.parliament.uk/business/publications/hansard/commons/todays-commons-debates/read/unknown/75/.